As more and more harrowing details on the attacks against protesters calling for civilian rule in Sudan come in, the dire circumstances under which those brave enough to stand against oppressive power must operate becomes clear.

While today’s news cycle seems largely centered on the fact that the U.S. is sending Assistant Secretary of State for African Affairs Tibor P. Nagy to meet with leaders in Sudan, the focal point here should be the fact that at least 118 people (per opposition-linked medical officials) were killed by government-backed military forces after they descended upon peaceful sit-in protesters earlier this month.

Below, get caught up on the tragic violence against protesters following the removal of longtime president Omar al-Bashir and learn how to help those fighting back against a repeat of the region’s previous military-strong regimes of oppression. 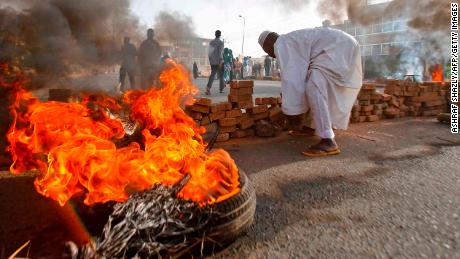 Omar al-Bashir was ousted in April, nearly 30 years after coming to power via a military coup during a north and south civil war in the country. An eventual International Criminal Court against him for genocide and other crimes against humanity, per a BBC News report at the time, was effectively put on hold amid a lack of support from the UN.

Following his removal, protesters continued their work toward ensuring a new military-ruled government wasn’t put into place, a move that would possibly lead to a repeat of what inspired this uprising in the first place. Additionally, activists say, many in those military groups were close to Omar al-Bashir and/or shared his ideology.

Earlier this month, those protesters were met with brutal force by paramilitaries, particularly at a protest camp in Khartoum. A medical official working with a pro-reform group of doctors told The Guardian this week that hospitals in the capital had estimated “more than 70 cases of rape” during the attack and its aftermath, which also saw more than 100 deaths and at least 700 injuries.

The Transitional Military Council and opposition groups, per Reuters, have now agreed to resume talks regarding who should head a transitional government ahead of eventual elections.

Amid the violence, many have very rightfully criticized the lack of mainstream media attention given to reform efforts in Sudan.

Pushes for awareness from Rihanna and select others, meanwhile, have inspired well-earned praise. Sudanese beauty blogger Shahd Khidir and actor George Clooney have also expressed public support for protesters and others affected by the violence.

How can I help?

Given ongoing internet outages and other communication interventions in the region, figuring out how to help those most in need can be difficult. However, there have been pushes from those in other nations to get the word out about the need for food and supplies, as well as the growing concern over the violence’s effect on children.

In a statement Tuesday, UNICEF executive director Henrietta Fore said the team was “gravely concerned” on the impact of the unrest on the country’s young people, “especially the reported use of excessive force against peaceful protestors.”

UNICEF, which focuses its work on helping disadvantaged children across the globe, offers a variety of ways for those interested in helping their efforts to become involved. For donor information and more, click here.

There are also petitions calling for a UN investigation into the massive violence against protesters earlier this month, including a Change.org one that’s likely to hit its goal of 75,000 signatures at any moment now.