The Black Entertainment Television (BET) Awards celebrate African Americans and other American minorities in music, acting, sports, and other fields of entertainment.

This years’ BET Awards, which held in Los Angeles on Sunday Night, 23rd June and was hosted by Regina Hall, featured several contemporary pop and rap artists who have been dominating the charts.

The showalso celebrated those considered as entertainment icons in the black community, including singer Mary J Blige, filmmaker Tyler Perry and the late rapper Nipsey Hussle.

Among the key moments was when Burna Boy who was nominated alongside Aya Nakamura – France, AKA – South Africa, Dave – U.K, Dosseh – France, Giggs – U.K and MrEazi – Nigeria, won the award for Best International Act. Burna Boy, although present at the award ceremony was not available to accept his award. His mother, Bose Ogulu took the stage and delivered a concise and riveting acceptance speech on his behalf.

She said, “Thank you very much BET, Thank you Africa because that’s the constituency for which we got noticed in the first place.The message from Burna, I believe, will be that every black person should please remember that you were Africans before you became anything else. Thank you.” 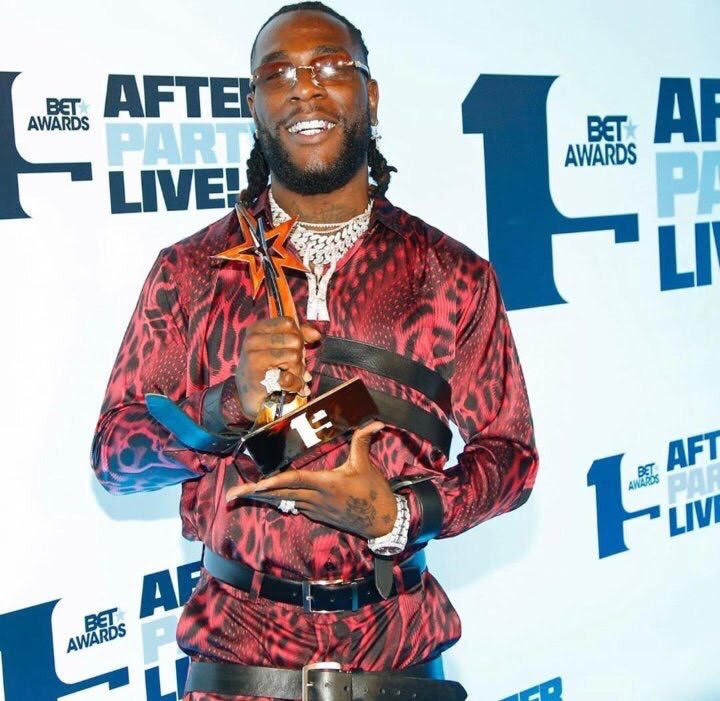 The speech earned her a standing ovation and viral reactions on social media, especially from African-Americans who agreed with her statement.Watch it here

The audience also erupted in cheers and a standing ovation for media mogul Tyler Perry, who earned the Ultimate Icon Award and delivered a powerful motivational speech.

“While everybody else is fighting for a seat at the table, talking about ‘OscarsSoWhite, OscarsSoWhite,’ I said, ‘Y’all go ahead and do that, while you’re fighting for a seat at the table, I’ll be down in Atlanta building my own.’ Because what I know for sure is that if I could just build this table, God will prepare it for me in the presence of my enemies.”

He also shared an amazing story about the location of his studio. “I built it in a neighborhood that is one of the poorest black neighborhoods in Atlanta so that young black kids could see that a black man did that, and they can do it too,” said Perry. “The studio was once a Confederate Army base — and I want you to hear this — which meant that there were Confederate soldiers on that base, plotting and planning on how to keep 3.9 million Negroes enslaved. Now that land is owned by one Negro.”

Here are the list of winners at the 2019 BET Awards:

Exclusive interview with Oluwaseun Ayodeji Osowobi a rape survivor and the founder of Stand To End Rape Initiative (S.T.E.R)

0
savvymagazineafrica June 25, 2019
No Comments Yet